Students Get Their Hands Dirty in Denkmann's 7 Habits Garden 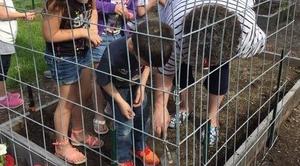 Students are getting their green thumb on!

It all started last summer when a Rock Island High School student went above and beyond for his Eagle Scout Project.

The project was to beautify Denkmann. Phase one was landscaping and phase two was to build a garden.

With the help of family, and later the Denkmann Student Council and the Corn Crib Nursery, he went ahead and did the fenced-in raised-garden beds on the school's west side.

Since then, a lot of work has been done to the 7 Habits Garden.

Student leaders helped filled the boxes with dirt and placed the mulch around the boxes. Arches were put up to support the Jack Be Little Pumpkins and the Purple Podded Pole beans in the kindergarten box.

Each grade level has their own raised garden bed.

In April, Greg Wolf, an Education Director at the Quad City Botanical Center stopped by to give the students a lesson based on what each grade level was planning on planting in their raised bed.

Kindergarten, First and Third grade have planted annuals. The other grades are waiting on a dry day to plant.